Read more about Anova Seafood in the News Items, our Publications and Press Releases.

Millions of tons of plastic currently pollute our sea surfaces. The Dutch 19-year old Boyan Slat came up with a concept to clean up the oceans from plastic debris by using the natural ocean currents.

On June 3th he presented the feasibility study that proves the realizability of his revolutionary concept and he launched the crowd funding campaign for the pilot phase of the project. Anova Seafood realizes that plastic pollution also endangers the fish industry, both in economic and health terms. We are therefore supporting The Ocean Cleanup project and they invite the fish industry to follow our example.

Plastic pollution
Millions of tons of plastic pollute the seas that Anova Seafood considers the main sourcing area for their seafood products. Within our CSR policy, we feel responsible for the environment we work in and the products we sell. The feasibility study of the Ocean Cleanup reveals plastic pollution causes economical, environmental and health problems which directly influence Anova and the fish industry as a whole. First, marine debris causes an estimated $1.27 billion in fishing and vessel damage annually in the region of the Asia-Pacific Economic Co¬operation (APEC) alone. Secondly, plastic pollution endangers animal species and ecosystems. Moreover, plastic is eaten by fish and thus comes into our food chain causing health issues for people. More than enough proof that the fish industry has a significant interest in clean oceans.

The Ocean Cleanup concept
Boyan Slat came up with a solution for marine debris that differs from earlier concepts in that it is a ‘passive cleanup’: it uses 100 kilometres long and 3 meters high floating barriers fixed to the sea bed in a V-shape to catch the debris as it flows past on the natural ocean currents. A platform pumps up and storages the plastic which is collected every 45 days. This method is 33 times cheaper and 7900 times faster than conventional cleanup methods using boats and nets. Moreover, it prevents bycatch, it is harmless to marine ecosystems and the gathered waste can be recycled into, for example, oil. One year of extensive research proved that this concept is in fact feasible: within 10 years they can remove half of the plastic in the most polluted sea area: the North Pacific. Of course, extraction alone is not enough. That is why The Ocean Cleanup stresses the importance of prevention of plastic pollution.

Crowd funding
Now the concept has proved to be feasible, crowd funding has started to realize a 3 to 4 year long large-scale operational pilot. The Ocean Cleanup aims to raise 2 million dollars within a 100 days to put their theory to work. They already raised over half of this amount. Anova Seafood feels The Ocean Cleanup can greatly contribute to the goals to sustainably source our fish and offer healthy seafood products to the consumer. That’s why we support this project. Willem Huisman, director at Anova Seafood: “We invite the seafood industry to also support this project to contribute to a sustainable future for our oceans and seafood”. 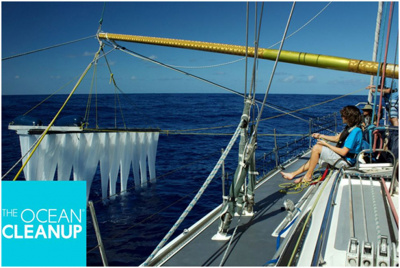